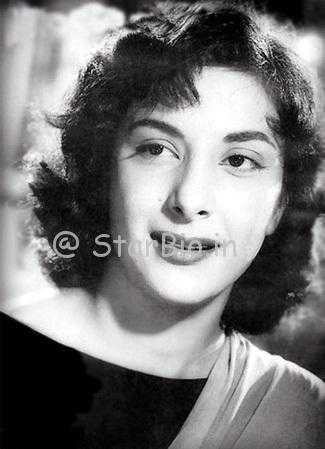 Nargis is one of the most successful superstars of Indian Cinema. She worked in more than 51 movies and is remembered as a legend of Bollywood. Apart from an actress, she was also a social worker who worked as a patron for the spastic children in the ‘Spastics Society of India.’ Check out Nargis Dutt wiki, age, family, husband, death cause, biography, facts & more.

Nargis was born on 1 June 1929 as Fatima Rashid in Kolkata (West Bengal). After some time, her family shifted to Allahabad from West Bengal.

Her mother who was a classical singer introduced Nargis to the cinema world. Although Nargis had a desire to become a doctor, yet as per the wish of her mother, she decided to build her career in the film Industry of India. Her movies broke the records of the big screen’s history and touched the heights of the sky due to her remarkable beauty and exceptional talent.

She was in deep love with actor Raj Kapoor. But, when Raj Kapoor denied continuing his relationship with Nargis after a long-term affair with her, Nargis broke down, but somehow, she gathered courage and made up her mind to concentrate on her acting career.

During the shooting of the movie ‘Mother India,’ a fire was broke out, and Nargis was saved from the blazing fire by actor Sunil Dutt. After this incident, she and Sunil Dutt came close to each other and later, they tied in the knot on 11 March 1958. With time, she gave birth to one son and two daughters.

She, along with her husband also founded ‘Ajanta Arts Cultural Troupe’ which used to entertain the Indian soldiers situated at the remote frontier lines. As she had a desire to serve the diseased and grief-stricken people, she became the patron of the ‘Spastics Society of India’ to work for the spastic children.

During 1980 to 1981, Nargis was nominated to the Rajya Sabha. But, unfortunately, at this time Nargis became a victim of the Pancreatic Cancer and couldn’t carry on this tenure due to her bad health issues. She went for her treatment to the ‘Memorial Sloan-Kettering Cancer Center’ in New York. But the disease couldn’t be treated, and she was brought back to India where she was admitted to the Breach Candy Hospital in Mumbai.

On 2 May 1981, she tormented with coma and lost all hopes of life. On 3 May 1981, this great actress of Bollywood said goodbye to this mortal world forever. When the dead body of Nargis was buried at the Badakabarastan in Marine Lines, Mumbai, the place was renamed as ‘Nargis Dutt Road’ in her memory.

She had a desire to see her son on the silver screen, but, Sanjay’s debut movie ‘Rocky’ was released on 7 May 1981, just four days after her death.

Nargis With Her Son Sanjay Dutt

Her father Mohanchand Uttamchand Tyagi was a wealthy Hindu Brahmin from Rawalpindi, Punjab (now in Pakistan), who later, adopted Islam and take the name, Abdul Rashid. Her mother Jaddanbai, was an Indian classical singer.

Nargis had a loving affair with her co-star Raj Kapoor, during her movies ‘Awara‘ and ‘Shree 420.‘ But when Raj Kapoor denied divorcing her wife Krishna, she ended her relationship with him.

According to some reports, when actor Sunil Dutt saved her life from the blazing fire on a set of the movie ‘Mother India,’ she felt deep love for him and decided to marry him. On 11 March 1958, she got married to Sunil Dutt and converted her religion from Islam to Hinduism. After marriage, she changed her name from Nargis to Nirmala Dutt.

With time, she gave birth to a son Sanjay Dutt (superhit star of Bollywood), and two daughters Priya (a member of Indian Parliament) and Namrata who is married to an Indian actor Kumar Gaurav.

At the age of six, Nargis made a debut of her career with the movie ‘Talashe Haq‘ in 1935. As a child artist, she worked in the second movie ‘Madam Fashion‘ directed by her mother Jaddanbai.

In 1957, she won the ‘Filmfare Award‘ for the Best Actress for the movie ‘Mother India,’ which was also nominated in the Oscars. According to Indian publisher and writer Baburao Patel, no other actress in the world would have been able to perform the role of a mother of the character Birju in ‘Mother India’ as beautifully as Nargis has performed.

In 1958, Nargis became the first Indian actress to receive the ‘Padma Shri Award.’ In the same year, after her marriage to Sunil Dutt, she decided to give up her career as an actress and performed in a few movies. In 1967, she won the ‘Filmfare Best Actress Award‘ and ‘National Film Award‘ for her last movie ‘Raat Aur Din.’ She was also the first woman who won the ‘National Film Award.’

For her outstanding performance in the Indian Film Industry, Nargis won several other awards. In 2001, she was honoured with the ‘Best Artists of Millennium‘ award by the company Hero Honda and film magazine ‘Stardust.’ In the same year, she was listed as the ‘Greatest Actress of All Times‘ by Rediff. com.