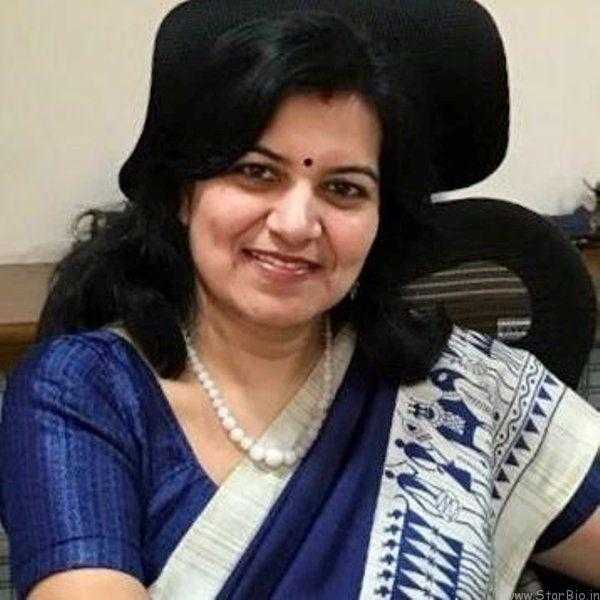 Aparajita Sarangi is a former IAS officer and politician, who is famous for her innovative and tenacious approach towards development. Because of her strict nature at work, she is often called, ‘Madam Angry.’

Aparajita Sarangi was born on 8 September 1969 (age 49 years; as in 2019) in Bhagalpur, Bihar. Her zodiac sign is Virgo. She holds a bachelors degree in English.

Aparajita Sarangi belongs to a brahmin family. Her father is an English professor, and her mother is also a teacher. She married Santosh Kumar Sarangi, an IAS officer.

The couple has a son named Shikhar Sarangi and a daughter named Archita Sarangi.

Aparajita Sarangi With Her Husband Santosh Sarangi, Her Son Shikhar Sarangi, And Her Daughter Archita Sarangi

Aparajita Sarangi cleared civil services exam in her first attempt in 1994 and joined as a sub-collector of Hindol, Dhenkanal, Odisha. She served as a collector in Khurda, Koraput, Nuapada and Bargarh districts of Odisha and district magistrate in Ganjam, Odisha. She served as director of Panchayati Raj Deptt. She was the municipal commissioner of Bhubaneswar Municipal Corporation (BMC) for three years and Commissioner & Secretary Director in School & Mass Edu Deptt, Bhubaneswar and Textile & Handloom Deptt. She voluntarily resigned from administrative services and joined BJP in 2018.

Honoured With Shakti Samman in 2012.