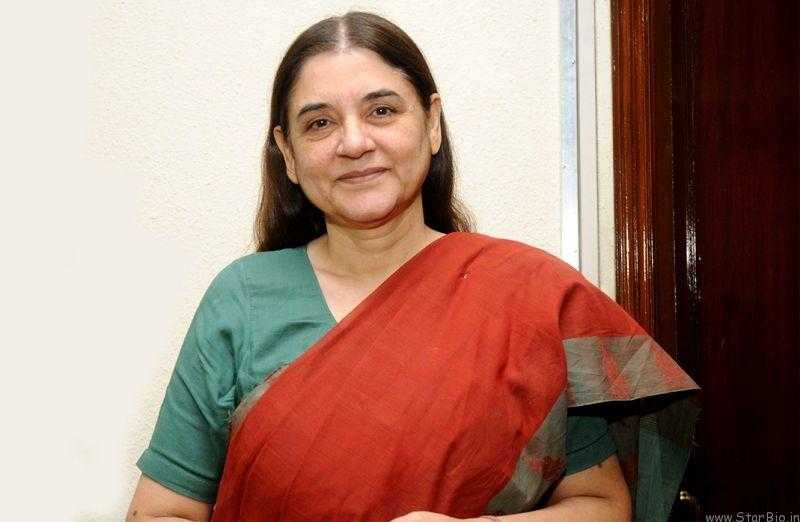 Maneka Gandhi is an Indian Politician and Animal Rights Activist. She is the Union Minister for Women and Child Development. She is from the BJP and also the Member of Parliament from Pilibhit. She is also the founder of an organization, People For Animals; which is the largest organization in India for animal welfare and their rights.

Maneka Gandhi was born on 26 August 1956 (age 62 years; as in 2018) in New Delhi. Her zodiac sign is Virgo. She did her schooling from The Lawrence School, Sanwar, Himachal Pradesh; which is one of the top boarding schools of India, where children of many renowned personalities of India have also attended.

She did her graduation from Lady Sri Ram College for Women, New Delhi and she studied German from the Jawaharlal Nehru University, New Delhi. She participated in many beauty pageants and fashion shows when she was in college. This got her interested in modelling, and she used to take up many modelling assignments while she was in college.

Maneka Gandhi Participated In Many Beauty Pageants When In College

She got her first big modelling assignment when she got selected as a model for an advertisement for Bombay Dyeing. She was widely appreciated for this ad. Apparently, when Sanjay Gandhi fell in love with her after seeing her in the advertisement.

Maneka Gandhi was born in a Sikh family to Lt. Col. Tarlochan Singh Anand and Amteshwar Anand. Her father was in the Army and her mother was the publisher of her magazine, Surya. She also has a sister, Ambika Shukla. She was married to Sanjay Gandhi, son of the former Prime Minister Indira Gandhi.

Her sister, Ambika Shukla, is also an animal rights activist.

Maneka Gandhi was involved in politics right after her marriage to Sanjay Gandhi. She used to go on campaigns and attend rallies with him but she never contested or was into active politics. After her husband’s death, she was sure that she would get Sanjay’s position in the party and would take part in politics along with Indira Gandhi, but Rajiv Gandhi was brought into politics to replace Sanjay, which was quite a shock to Maneka; as she felt that she had been cheated. After a falling out with Indira Gandhi, she along with supporters of Sanjay Gandhi, formed a party named the Rashtriya Sanjay Manch in 1983.

Her party fought the assembly elections of Andhra Pradesh and won 4 of the 5 seats. This was an achievement for her as her party was considerably new. In 1984, she contested the Lok Sabha elections from Amethi against Rajiv Gandhi but lost; due to the public sympathy, he had gained after Indira Gandhi’s assassination.

In 1988, she merged her party with The Janata Dal and was also appointed its General Secretary. The next year she was elected to the Lok Sabha for the first time on a Janata Dal ticket. She was also appointed as the Minister of State for The Ministry of Environment in the VP Singh Government

In 2004, she and her son Varun Gandhi joined the BJP. She contested the Lok Sabha Elections from the Pilibhit seat and has been winning since then. In 2014, she was inducted into the Narendra Modi Government as the Union Minister for Women and Child Development.

In 2019 she will be contesting the Lok Sabha Elections from the Sultanpur Constituency.