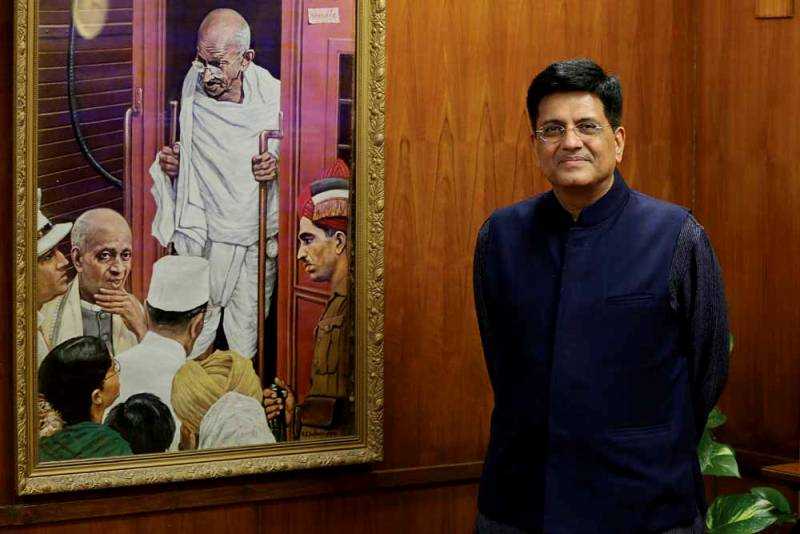 Piyush Goyal is an Indian politician. He is a Rajya Sabha MP from Maharashtra. Goyal was appointed as the Minister of Railways and the Minister of Coal in the Narendra Modi government. He was given the additional charge of the Finance Ministry temporarily in August 2018 and he presented the 2019 Interim budget.

Piyush Goyal was born on 13 June 1964 (age 55 years; as in 2019) in Mumbai, Maharashtra. His zodiac sign is Gemini. He did his schooling from Don Bosco High School, Mumbai. He pursued B.Com from the H.R. College Of Commerce & Economics in 1984. In 1987 he got his Bachelors in Law Degree from the Government Law College, Mumbai. He also took admission in the Institute of Chartered Accountants of India, New Delhi and was the All India second rank holder. He has been a part of many Leadership programs at universities like Yale, Oxford, and Princeton. Goyal also holds an F.C.A. Certificate; which is a certificate given to Chartered Accountants after they complete 5 years of practice.

Piyush Goyal After Graduating From College

Piyush Goyal belongs to a Vaishya (Bania) Family. His father, Ved Prakash Goyal, was an Indian politician and a former Union Minister in the Atal Bihari Vajpayee Government. His mother, Chandrakanta Goyal, is a former BJP MLA from Mumbai.

He is married to Seema Goyal. They have a daughter, Radhika, and a son, Dhruv.

Piyush Goyal With His Family

Piyush Goyal has been involved in politics for a long time. In 1991, he was the Deputy in-charge for the parliamentary elections. In 2002, he was appointed in the Task Force for inter-linking all the rivers of India. From 2004 onwards, he has been overlooking all the elections at a central level that the BJP contests in and has also played a crucial part in the BJP’s growing publicity. He was appointed as the National Treasurer of the Bharatiya Janata Party (BJP) from March 2010 to May 2014. He was appointed as a Member of the Standing Committee on Finance in August 2010. On 5 July 2012, he was elected to the Rajya Sabha from Maharashtra.

Piyush Goyal has been a key strategizer for the BJP. He was one of the first people to come up with the idea of Narendra Modi as PM. Goyal also heads the Information Technology (IT) communication sub-committee and is in charge of all the communication and initiatives of the BJP through social media. Piyush Goyal also heads the Press Information Bureau.

He has been a member of many committees related to economic issues. He is also known as a troubleshooter as whenever there is a crisis, his opinions are always considered. He participated in many economic debates in the Parliament. On 27 May 2016, he was appointed as the Union Minister of Power, Coal, and New & Renewable Energy. He took started many important initiatives during his term. He was widely praised and credited for providing 24*7 electricity to 16,385 villages of the 18,452 villages. He claims that the remaining 944 villages will also be provided with electricity before 15 August 2022. He was appointed as the Union Railway Minister on 3 September 2017. He took charge from Suresh Prabhu; who was transferred to the Ministry of Civil Aviation and Commerce.

As the Union Minister of Railways, he introduced several trains with updated technology and faster speeds than the existing ones; the most significant being Train 18, which runs at a speed of 160 km/hour. He helped improve the condition of railway platforms across India. He increased the capital expenditure of the Railway Ministry by Rs. 5.1 Lac Crores. During his tenure as Railway Minister, there has been a 59 per cent increase in commissioning of new, double, third and fourth railway line projects.

On 14 May 2018, he was given the additional charge of the Finance Ministry; after Finance Minister Arun Jaitley had to take a leave of absence due to serious health issues. During his term as Finance Minister, he presented the 2019 Interim Union Budget of India on 1 February 2019.

Piyush Goyal Before Presenting The Budget

On 15 February 2019, Arun Jaitley assumed office and Goyal was relieved from his duties as Finance Minister. Piyush Goyal welcomed back Arun Jaitley with a cake as his health had improved significantly.

On 4 April 2018, it was revealed that a company, Shirdi Industries, whose chairman was Piyush Goyal until July 2010 and was now headed by his wife Seema Goyal had Rs. 650 Crores in unpaid loans. In 2015 the company was declared as an NPA and its loans were written off. Many people including Rahul Gandhi raised questions over this and demanded to know why Goyal’s company, Shirdi Industries, was written off as a non-performing asset and no enquiry or probe was ordered.

Piyush Goyal has two cars registered to him, a Toyota Corolla and a Toyota Camry Hybrid

Salary: Rs. 1 Lac + Other Allowances (as a Cabinet Minister)