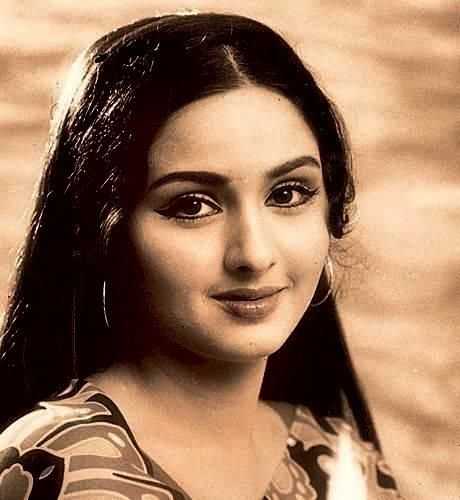 Leena Chandavarkar is a former Indian Actress. She is the 4th wife of Kishore Kumar and was with him until his death.

Leena Chandavarkar was born on 29 August 1950 (age 69 years; as in 2019) in Dharwad, Karnataka. Her zodiac sign is Virgo. She did her schooling from the Bassel Mission High School, Karnataka. She did not attend college. After she completed her schooling, she participated in the Filmfare Fresh Face competition in 1965 and finished as a runner-up. After that, she got several advertisement assignments. She worked in the advertising industry until 1968. She did her first film in 1968.

Leena Chandavarkar In An Ad Shoot

Leena was born in a Brahmin Family. Her father, Srinath Chandavarkar, was an officer of the Indian Army. Not much is known about her mother. She has a brother, Anil Chandavarkar. She was married twice. Her first marriage was with Siddharth Bandodkar. Her second marriage was with Kishore Kumar. She had a son with him, Sumeet Kumar.

Leena used to get several modelling assignments. She wanted to get into acting but was not getting a good film. She was very conservative and traditional; due to which she had to let go of many films. She finally got a good role in Sunil Dutt’s film Man Ka Meet in 1968. She was cast as the lead actress with Sunil Dutt’s brother Som Dutt. Vinod Khanna was also cast in the film as the villain; it was Khanna’s debut film too. During 1969-1979, she did many films and with various popular actors. By the end of the 1980s, she had worked with Dilip Kumar, Rajesh Khanna, Sanjeev Kumar, Jeetendra, and many more.

In 1970, she did a film with Jeetendra, Huumjoli. The movie’s song Dhal Gaya Din Ho Gayi Shaam was an instant hit and was loved by all across India. Leena became a household name after that and she became very popular after that song.

She had become a very popular actress and every director wanted her to be the film’s lead actress. In 1971, she did a film with Rajesh Khanna, Mehboob Ki Mehndi. It was considered her best performance and she received praises from all over India for he role in the film and the way she portrayed it.

She did 30 films in her career of 15 years. Her last film was Sarfarosh. In an interview in 2015, she said that she is still open to doing films if anyone offers a good role.

On 16 February 2015, during an awards show which Leena was attending, she had an incident with Ram Jethmalani; who was also at the event. While she was going on the stage, Jethmalani came forward to take her hand and greet her but he accidentally ended up kissing her. Many people on social media platforms felt sorry for Leena and trolled Jethmalani after pictures of the kiss went viral. Leena later clarified that they both admire each other and there was nothing wrong with the kiss.