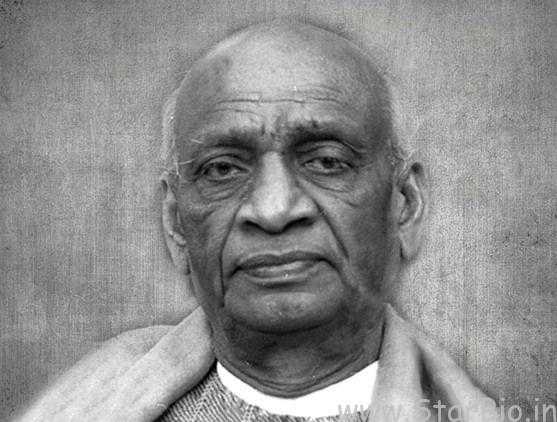 Vallabhbhai Patel is such a name, which reminds us of the unification of India. The whole credit to unify India goes to Vallabhbhai Patel. Patel was not only a freedom fighter but a renowned barrister and politician also. After returning from England, he started his profession as a barrister in Ahmedabad. He received glory along with a great amount of wealth. Having been inspired by the ideology of Mahatma Gandhi, he leaped into the Indian Independence Movements. From the late 1910s to the Independence of India, Patel faced many imprisonment sentences, participated in many movements. After Independence, Patel became a key figure to the Unification of India and for this work, he earned a famous nickname, Iron Man of India.

Vallabhbhai Patel was born on 31 October 1875 in a Patidar family in Nadiad, Bombay Presidency, British India (Now in Gujarat). He received his primary education in Nadiad, Petlad, and Borsad. In childhood, he came up with an Idea to be a successful lawyer. At the age of 22, he passed matriculation. He used to borrow books from his friends and studied himself. Later, he settled in Godhara with his wife, Jhaverba Patel.

In the late 1900s, Patel came down with the bubonic plague while caring his friend with the same disease. At that time, he immediately sent his family to a safe place as the disease was highly contagious. Sometimes after he recovered from the disease. Patel founded “Edward Memorial High School” in Borsad and was the first chairman of school.

Patel practiced law in Godhra, Borsad, and Anand in Gujarat. But, Patel wanted to go to England to be a barrister, but at that time, he had not money enough to study in England. However, later, at the age of 36, he enrolled at Middle Temple Inn in England. He was brilliant at study so, he completed the 36-months course within 30-months and topped the class despite having no college background. When Patel was studying in England, he was affected by English lifestyle a lot and adopted it interestingly. After returning from England, he was absorbed in the English style. He used to wear suits and speak only in English.

Sardar Patel in England in 1910

Patel emerged as a great lawyer of Ahmedabad and that profession earned him a great wealth and fame. At that time, he was a great player of Bridge also (A card game). Patel sent his children to an English Medium school in Mumbai. In 1909, Patel’s wife Jhaverba was hospitalised to undergo a surgery of Cancer. Despite successful surgery, she died in hospital. Patel was informed of his wife’s death when he was cross-examining the witness in the court. Patel read the note and put that in the pocket and continued his work.

Patel’s mother with her five sons, Sardar Patel at the extreme right

and son, Dahyabhai Patel (born in 1906). Gautam Patel and Bipin Patel are his grandsons.

Patel was a skilled barrister. Initially, he was not interested in politics. But, at the urging of his friend, he fought the municipal election in Ahmedabad in 1917 and won. He was elected as a Sanitation Commissioner of Ahmedabad and the same year, he was appointed the secretary of Gujarat Sabha (A political body that helped Gandhi Ji in his campaign). In 1920, he was chosen as the President of Gujarat Pradesh Congress Committee and served until 1945. From 1924 to 1928, he was the chairman of the Municipal Committee in Ahmedabad. At the time of ‘Salt Satyagraha Movement,’ Patel was the first to be arrested. Indeed, he was arrested on 7 March 1930 but later, he was released in June. Initially, he did not support Mahatma Gandhi. Once Mahatma Gandhi came to the Gujarat Club for a speech. At the same time, Patel was playing bridge at the club. Patel did not go to listen to Mahatma Gandhi. When another activist and his friend G.V. Mavalankar began to go to the speech of Mahatma Gandhi, Sardar Patel stopped him and said, “Gandhi would ask you if you know how to shift pebbles from wheat and that is supposed to bring independence.”

When Mahatma Gandhi started the Indigo Revolt in favour of peasants. Patel got influenced by Mahatma Gandhi a lot and a subsequent meeting with Gandhi Ji in October 1917, inclined Patel towards Mahatma Gandhi’s ideology. During the Kheda Satyagraha, Patel came closer to Mahatma Gandhi. Gandhi Ji said, “if it were not for Vallabhbhai’s assistance, this campaign would not have been carried through so successfully”. After Jallianwala Bagh Massacre in 1919, Patel supported Gandhi Ji in his Non-Cooperation Movement Patel threw all his English style clothes and began to wear Khadi clothes. For this, he set up bonfires in Ahmedabad in which British clothes, flag, and goods were burned.

He brought 562 princely states together and formed a large Independent State, India. He was the supreme commander-in-chief of Indian Army during Indo-Pakistan War 1947 and Political Integration of India.

During the summer of 1950, Patel’s health declined. His daughter took excessive care of him. After 2 November 1950, his health worsened. He began losing consciousness and confined to bed. On 12 December 1950, he flew to Bombay (Now, Mumbai) on the advice of Dr. Roy. He died on 15 December 1950, after suffering a massive heart attack at Birla House in Bombay.

He was cremated in Sonapur in Bombay and was attended by almost one million people including then Prime Minister Nehru, Rajagopalachari, and President Rajendra Prasad.

In 1991, the govt. of India honoured him posthumously with the highest civilian award, Bharat Ratna.