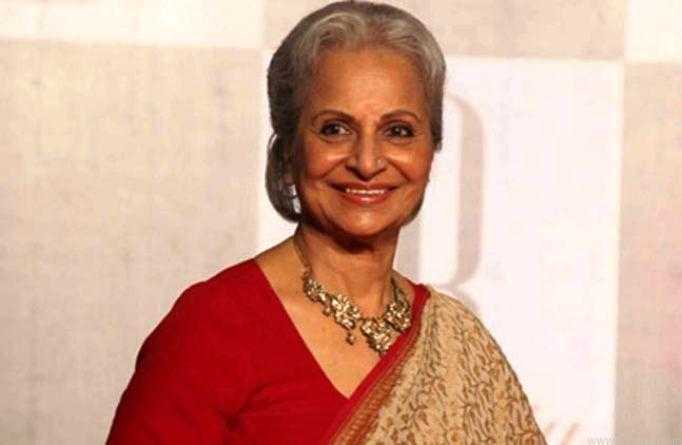 Waheeda Rehman is an Indian film actress who has worked predominantly in Hindi films. She has also appeared in Telugu, Tamil, and Bengali films. She has been quoted as ‘most beautiful’ actress by many media channels. She gained recognition from the movie “Guide (1965)” and is known for her contribution in different genres of the films.

Waheeda Rehman was born on 3 February 1938 (age 81 years; as in 2019) in the Chengalpattu town of Tamil Nadu, India. Her zodiac sign is Aquarius.

She and her sister learned Bharatnatyam in Chennai from her Guru Trichunder Meenakshi Sundaram Pillai and Guru Jayalaxmi Alva, Doyen among ‘Nattuvanars (the person who trains a dancer and would also join the dancer in the performance to sing vocalised rhythm, known as Sollukattu)’ in Mumbai.

She dreamt of becoming a doctor, but due to her mother’s illness, she gave up on her dreams.

Waheeda Rehman belongs to the Dakhini Muslim Family. Her father Mohammed Abdul Rehman was a District Commissioner and died when Waheeda was in her teens. Her mother’s name is Mumtaz Begum. She has three sisters namely Sayeeda Malik, Shahida, and Zahida. Zahida is the eldest sister.

She got married to the veteran actor Shashi Rekhi (Screen name Kamal Jeet).

She has a son named Sohail Rekhi and a daughter named Kashvi Rekhi, who are writers.

Waheeda Rehman With Her Daughter Kashvi

She was rumoured to have been in a relationship with the veteran director, Guru Dutt.

She made her acting debut with the Telugu movie “Jayasimha” in 1955.

Her Tamil debut was with the film “Kaalam Maari Pochu” in 1956.

Her career reached the peak with the movie “Guide (1965)”, and she became the most demanded actress of that time.

She has acted with many noted actors like Dev Anand, Kishore Kumar, Dilip Kumar, Rajesh Khanna, Amitabh Bachchan and many more. The biggest hit of her career was Khamoshi (1970) opposite Rajesh Khanna.

From mid-seventies, her career as the lead heroine ended, and she started her career as a character actor. After her appearance in the movie Lamhe (1990), she retired from the film industry for 12 years. She made her comeback with the movie Om Jai Jagadish in 2002.