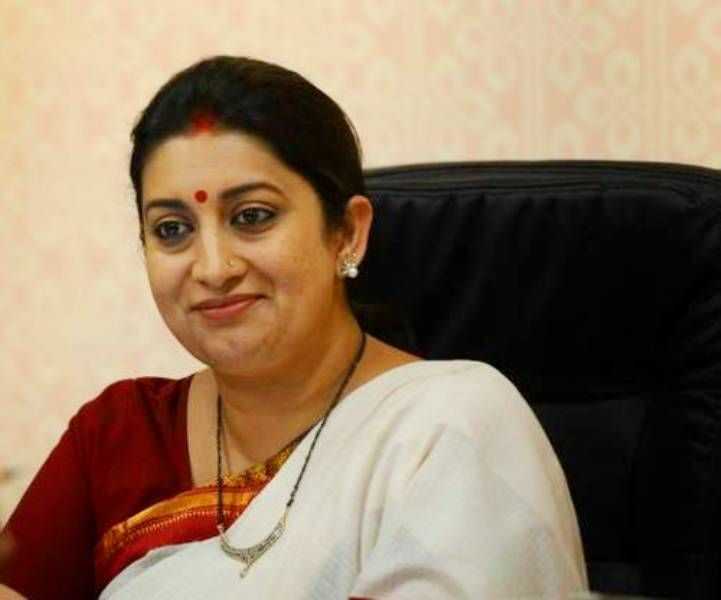 Smriti Irani is an actress-turned-politician, who is  Member of Lok Sabha from Amethi Constituency in the 17th Lok Sabha term (2019-2024).

Smriti Irani As A Child

She did her schooling from Holy Child Auxilium School in New Delhi. She is a 12th pass. She enrolled for Bachelors of Commerce from School of Open Learning, Delhi University but did not complete her three-year degree course.

She was born to a Punjabi-Maharashtrian father, Ajay Kumar Malhotra and Bengali-Assamese mother, Shibani Bagchi (ex-member of Jana Sangha, the right wing of Rashtriya Swayamsevak Sangh(RSS)).

She has two younger sisters. She got married to Zubin Irani, a Parsi businessman. The couple has a son named Zohr Irani and a daughter named Zoish Irani.

Smriti Irani With Her Family

She also has a step-daughter named Shanelle Irani, who is Zubin’s daughter from his first marriage with former beauty contestant, Mona Irani.

The ex-wife of Zubin Irani, Mona Irani and daughter, Shanelle

In 2004 Lok Sabha Elections, she contested against Kapil Sibal from Chandni Chowk Constituency in Delhi and lost. In the same year, she became the President of Maharashtra Youth Wing of BJP. She was also nominated as the executive member of the central committee of BJP. In 2009, she campaigned for Vijay Goel’s candidature in New Delhi. In 2010, she was appointed as the National Secretary of BJP and was appointed as the President of the Mahila Morcha (women wing) of BJP.  In 2014 Lok Sabha elections, she contested against Rahul Gandhi in the Amethi Constituency and lost by 1,07,923 votes. Nevertheless, Narendra Modi appointed her as the Human Resource Development in his cabinet, making her the youngest cabinet minister of that time.

In a cabinet reshuffle in 2016, she was switched from the Ministry of Human Resource Development to the Ministry of Textiles. In 2017, she was handed in the additional charge of Ministry of Information and Broadcasting, which was taken away from her in 2018 and was given to Rajyavardhan Singh Rathore. In 2019, she contested the Lok Sabha Elections from the Amethi Constituency against Rahul Gandhi and won by a margin of 55,120 votes.

She was one of the contestants of Miss India Beauty Paegent in 1998, who couldn’t reach the top 9.

In 1998, she made her first appearance in the song “Boliyan” of the album “Saawan Mein Lag Gayi Aag” with Mika Singh. In 2000, she made her Television debut as an actress with the show “Aatish” and “Hum Hain Kal Aaj Aur Kal,” which aired on Star Plus. In the mid-2000s, she became a household name when she played the role of ‘Tulsi Virani’ in Ekta Kapoor’s production “Kyunki Saas Bhi Kabhi Bahu Thi (2000-2008).” The serial ran for eight years, and Smriti became the most loved Bahu.

In 2007, she made her debut as a TV producer with the TV serial, “Virrudh” for Sony TV.

Smriti Irani As A Host Of The Show-Yeh Hai Jalwa

Smriti Irani In A Scene From Malik Ek

In 2011, she made her Telugu debut with the movie “Jai Bolo Telangana.”

She made her Bengali film debut with the movie “Amrita” in 2012.

She has done various theatre projects; the first one being a Hindi play, “Kuch Tum Kaho Kuch Hum Kahein.” She then did her first Gujarati play titled, “Maniben.com.” She also did a Telugu play named “Jai Bolo Telangana.”

Smriti Irani With Her Award